We haven’t done many Super Game Improvements irons, but we feel Adams has designed and developed the best and are the leader.  The Adams A7OS irons is the epitome of what a good game improvement iron should be – designed for the golfer wanting to experience easy to hit, forgivable irons.

The Adams A7OS starts out the same as it’s big brother, replacing the 3 and 4 irons with hybrids to ease the pain in dealing with those long irons.  But the OS version took it one step further, replacing the 5, 6, and 7 irons as well.  Adams pushes the envelope even further by adding an extra 44 grams in the heel and toe for superior stability in the 3 through 7 irons.  The 6 and 7 irons are hollow back designed to launch the ball higher than the conventional counterpart.  The short irons are conventional.

“I know these are supposed to be for hackers, but I would recommend them to anyone with a 12 handicap or higher”

“It has ridiculous performance” 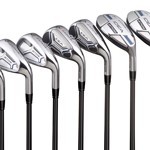 As previously noted, Adams has cornered the market on game improvement irons.  The experience in hybrids has been a natural progression to fill this very needed gap between the high and mid handicappers.  Adams adds a nice shaft stock option in the Grafalloy ProLaunch Axis too!

Not much.  If you are in this market, you need to check these out.

Adams has been the leader in the game improvement and super game improvement irons market for some time now.  The new Adams A7OS fills the need for the higher handicapper looking for distance and forgiveness.  Put this one on the short list.