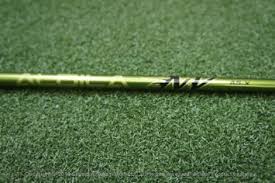 The Aldila NV features a unique Micro Laminate Technology (MDT) that provides the player uncompromising power, a consistent flex, and superb feel... a highly effective combination. The Micro Laminate Technology allows for an extraordinary slim design that provides a stable profile. This technology has allowed the shaft to be an outstanding all around performer with fantastic feel, for maximum effect.

There are a four NV models to choose from, categorized by weight (grams). The lightest model, the NV 55, then the most popular NV 65, followed by the NV 75 and ending with the NV 85. The most popular, NV 65 fits well for most players due to its middle of the road profile. All four models are classified as a low to mid launch angle shaft. The torque starts at 3.9 for the NV 55 (exception of a more generous 4.6 for the "L" flex), down to a very tight 2.6 for the NV 85. The NV is also available in the Proto model which is definitely geared toward the highly skilled player with good club head speed, looking for a low, piercing ball trajectory.

Definitely geared to the stronger player looking for optimal ball trajectory, feel and consistent flex. The shaft has been extremely popular on the PGA and Nationwide tours.

Very consistent flex, exceptional feel, that just so happens to pack a punch. The Micro Laminate Technology provides power and consistency throughout making it a very accommodating shaft for the better player.

Very few if any. The only negative is that NV is geared for the stronger player. Therefore for slower swing speeds, you would probably benefit from a shaft with more torque.

"very good shaft...amazingly consistent kick off of the tee and great flight off both the turf and tee"

"If you want a great wood shaft the NV 85 is the one. I wouldn't change a thing. Right down the middle and long. Got to love it!!!"

"The Aldila NV 85 is just the best shaft on the market for the low handicap player. A consistant kick on every swing allowing one to shape needed shots."

The Aldila NV produces rockets off the tee - definitely a high-end shaft. The NV, in the right hands, will provide enhanced power, flex, and precise feel that few shafts can match. The NV will give you the confidence off the tee that will carry over to other areas of your game making you the "Big Dog" in your foursome!

Experience explosive power and control off the tee sure to make your buddies fret and sweat! Read our review of the Aldila NV... don't get left playing your ball first!

Please provide us your review of the Aldla NV shaft by going up on top of this post and clicking the Aldila NV Review!

Did you enjoy this review? If so, please take a few moments to bookmark for others to enjoy!