Where In The World is Phil Mickelson? #PhilWasHere 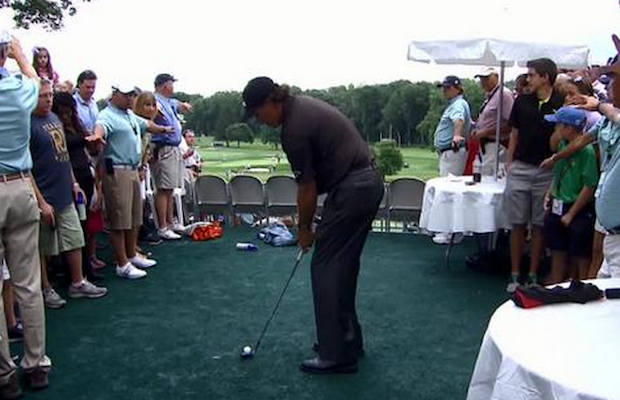 Following a totally nondescript first seven months of 2014, Phil Mickelson is everywhere these days! Only most of it is figurative.

It’s been a tough week for Mickelson at The Barclays, with the 44-year-old registering a Made Cut Did Not Finish. But a pair of offline drives manufactured a social media storm.

The strategy has already experienced massive participation, but what exactly is the impetus behind this viral sensation?

Well, as Phil Mickelson is wont to do, he hit some poor tee shots this week at the Barclays, specifically at the drivable par-four 5th hole. On Friday, Mickelson produced a massive push from the tee box, whacking his driver so far left that his ball ended up sitting on the turf of the veranda of a corporate hospitality tent.

Rather than take relief from the tent and drop the ball no closer to the hole, Mickelson elected to play his ball from the hospitality area. A thrilling decision, although his efforts ended in a bogey. Showing a sense of humor, the staff at Ridgewood Country Club commemorated the occasion by spray painting “Phil was here” on the hospitality turf.

Crazy enough? Sure. Was Mickelson finished? No.

Obliging the theme of insanity, Mickelson once again played from the turf, this time narrowly missing a birdie putt before settling for par. Once again, the Ridgewood staff showed its comedy chops with another spray painted sign.