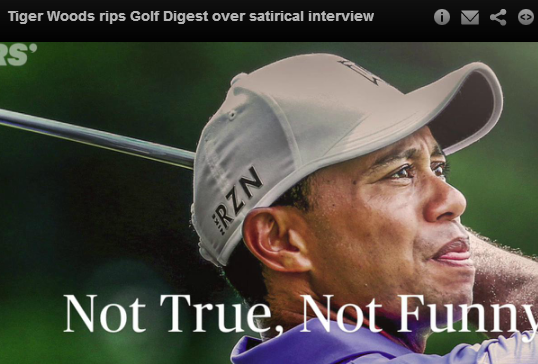 Tiger is angry, really angry, and he’s not going to take it anymore.

And he’s taking that anger out on an 84-year-old man.

Woods, writing for Derek Jeter’s The Players’ Tribune, penned a first-person takedown of legendary sportswriter Dan Jenkins headlined “Not True, Not Funny.” Tiger takes issue with Jenkins’ fictional and satirical “interview” of him in an issue of Golf Digest.

“Did you read Dan Jenkins’ interview with me in the latest Golf Digest? I hope not. Because it wasn’t me,” writes Tiger. “It was some jerk he created to pretend he was talking to me. That’s right, Jenkins faked an interview, which fails as parody, and is really more like a grudge-fueled piece of character assassination.”

Jenkins pokes fun at Woods’ supposed poor tipping skills and freezing out of friends, among other jabs. Jeter’s site bills Tiger’s blog as the first in a series of columns called “Straight Up,” in which athletes can “offer their side on something that has been written or said about them.” That he certainly does.

“His concocted article was below the belt,” Woods blogs. “Good-natured satire is one thing, but no fair-minded writer would put someone in the position of having to publicly deny that he mistreats his friends, takes pleasure in firing people, and stiffs on tips — and a lot of other slurs, too.”

Here’s the letter Woods and agent Mark Steinberg sent to the magazine to protest the story.