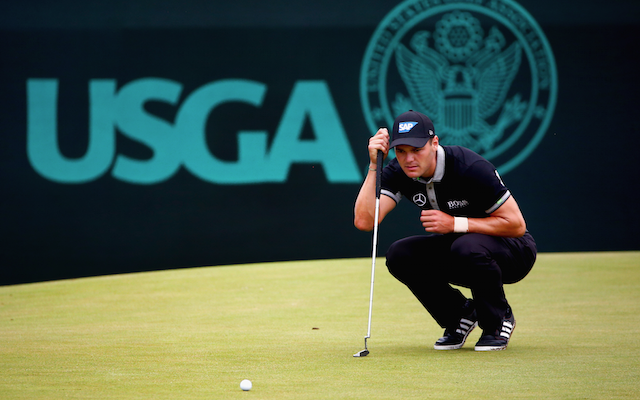 (CBS Sports) All of the hyperbole, let it flow.

Yesterday Kaymer said we shouldn’t expect another great round out of him and he gave us something that was arguably even better.

“5 under par is exceptional,” said Kaymer on Thursday. “No one should expect me to shoot another 5 under par the next three rounds. I don’t.”

Except that he did it again. For the second time in two days.

Before Thursday the best round at a US Open at Pinehurst had been 66 by a guy named Peter Hedblom in the second round in 2005.

Kaymer just broke that mark in each of his first two rounds.

He sounded excited about it, too.

“Very solid again,” Kaymer told ESPN’s Tom Rinaldi. “I didn’t make a bogey, which is nice. I kept it very well together.”

Kaymer also became just the fifth golfer to ever reached double digits under par at this tournament.

All but Morgan went on to win. Woods and McIlroy won by a combined 23 strokes.

Hilariously the best 36-hole score at the past two US Opens at Pinehurst was 3 under by Phil Mickelson, David Duval, and Payne Stewart in 1999. Kaymers is at 10.

But there’s even more at stake.

The largest lead ever after 36 holes of a US Open was six strokes by Tiger in 2000 and McIlroy in 2011. Kaymer looks likely to shatter that depending on what the afternoon groups do. He’s eight up on the next-best guy in the clubhouse.

The scary part is that he made it look easy. In becoming the first golfer to ever open with two 65s or better at a major he did it with ease. Even his bad shots were close and he seemingly didn’t miss a putt he needed to make.

One bogey in 36 holes so far and this tournament is far from over because there are 36 holes left.

Kaymer said as much to Rinaldi.

“It’s not a done deal,” said Kaymer. “You don’t want to approach Saturday and Sunday in a relaxed way. There’s never really a time where you can take it easy. You have to set your own goals and keep playing well.”

That’s nice to hear from Kaymer, who has a good rep as a closer, but let’s be honest for a minute.

It is a done deal.

This tournament is over.