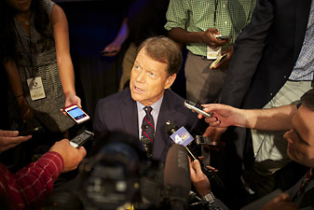 Bradley and Mahan were widely expected to make the team, but Webb Simpson was a minor surprise. Watson said he made the decision to select Simpson on Tuesday morning when he reviewed Simpson’s performance at the 2012 Ryder Cup at Medinah. The U.S. lost by a point after a dramatic final-day comeback by the Europeans, and Simpson compiled a 2-2 record with two 5-and-4 victories.

“Experience was big,” Watson said of the rationale behind his picks. “All three players have an even record or a winning record in the Ryder Cup.”

The U.S. team will be underdogs against Europe when the teams square off in Gleneagles, Scotland, on Sept. 26-28. Europe has won the last two Ryder Cups and has only lost once — in 2008 — since 1999.

However, Watson said that “flying under the radar” could be an advantage for the Americans in Scotland.

“I have a fundamental belief in our team and more importantly our players believe they can win the Ryder Cup,” Watson said.

The announcement was a disappointment to several American players in consideration for a captain’s pick, including Chris Kirk, Brandt Snedeker, Bill Haas, Ryan Moore and others. Watson said he called more than a half-dozen players to tell them in person that they didn’t make the team, including Kirk, who won last week’s Deutsche Bank Championship.