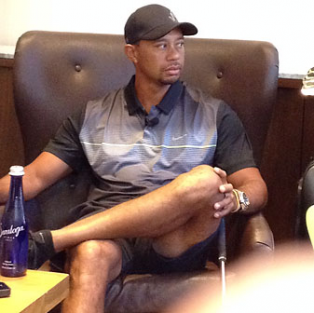 Tiger Woods made an appearance at Nike’s media day in New York City on Tuesday morning to chat about his new Nike irons, his old clubs, persimmon woods, testing new clubs, and a few other items to boot.

Mike Taylor, a master modelmaker at Nike Golf and an industry veteran who got his start under Tom Stites, sat in with Tiger as well as they talked about Nike’s overall philosophy on better utilizing weight distribution and how he and Tiger share a similar taste in club design and aesthetics.

In their conversation Tiger mentioned that the new Vapor Pro irons, which were designed with a great deal of input from him, deliver a “heavy hit” and that is what you want from an iron. He also said that though he doesn’t profess to be an expert on golf club design, he considered the new Vapor Pro with it’s “modern muscle,” design to be a breakthrough.

“I dropped out of college so physics is not my specialty, but we’ve got the center of gravity in the middle of the face,” Tiger said. “That’s a game-changer.”

Tiger went on to talk about a variety of things relating to his equipment and mentioned the fact that he has basically played the same lofts, lengths, shafts, and grips since he was about 15.