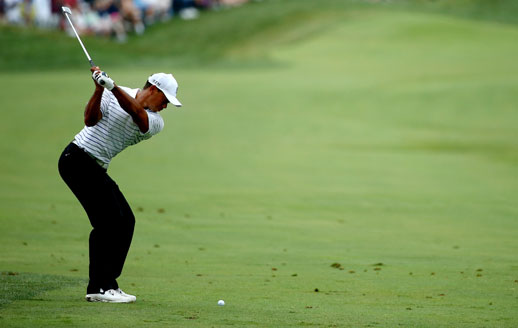 After a disappointing season, Tiger Woods looks on track to at least finish the year on the golf course.USA Today reports the 14-time major winner has started to hit full shots after getting the OK from his doctors. Woods, whose back injury had previously limited him to chipping and putting, is scheduled to play in his tournament at Isleworth in December.

Woods had surgery for a pinched nerve before the Masters. He came back at the AT&T National and missed the cut before making the cut on the number at the British Open. At the WGC-Bridgestone Invitational, Woods withdrew in the final round after injuring his back again. He played the following week in the PGA Championship, but missed the cut before announcing he would take time off to heal. His best finish in seven PGA Tour starts in 2014 was a T-25 at Doral, and he has currently fallen to 17th in the Official World Golf Ranking.