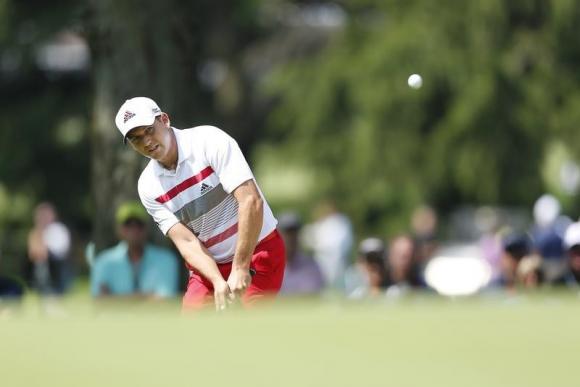 Aug 1 (Reuters) – Spaniard Sergio Garcia birdied the final seven holes to match the course record and storm to a three-stroke lead after the second round of the WGC-Bridgestone Invitational in Akron, Ohio on Friday.

The British Open runner-up put on a clinic on the greens, one-putting the final 11 holes for an astonishing nine-under-par 61 on the demanding Firestone Country Club course.

He tied the course record set by compatriot Jose Maria Olazabal in 1990, and his back nine of 27 beat the old record by two strokes.

“I think that was my lowest round in tournament play and also my lowest nine holes,” Garcia told Golf Channel after posting an 11-under-par 129 halfway total.

Garcia birdied eight holes on the back nine, a par at the 11th the only blemish on his card.

Two of his birdies were tap-ins, another came from eight feet, while the other five were from 13 feet or longer.

“I was hitting the ball really well on the back nine,” Garcia said. “I kept giving myself chances and I rolled it very nicely, so I’m thrilled with it.”

Garcia was the ninth player ever to shoot 27 on either the front or back nine on the PGA Tour. Corey Pavin holds the record on 26, set at the 2006 Greater Milwaukee Open.

He was not so precise on the front nine, picking up only a tap-in birdie at the par-five second, and escaping trouble a few times after wayward drives.

“I got a little bit lucky on the front nine,” he admitted. “I hit three bad tee shots and got good breaks and was able to save par and that kept my round going.”

Until Garcia’s late flourish, Rose seemed likely to end the day in the lead after hitting 16 greens in regulation in a near flawless tee-to-green display.

Rose described his round as a “stark contrast” to his opening 65.

“Yesterday I scrambled it around and made everything,” the world number four said. “Today I hit it much closer to the hole, gave myself plenty of looks and didn’t make as many.

“Early on I just wasn’t seeing the breaks very well. I began to putt much better on the back nine.

“I had the opportunity to shoot a low one today but all in all it was a nice step forward the way I felt with my long game.”

British Open champion McIlroy, playing immediately behind Garcia, was not quite able to draft in his slipstream, but had no complaints after three late birdies for the second best round of the day.

“I thought I’ve just got to keep making a few birdies to stay on his coattails and not be too far back going into the weekend,” McIlroy joked.

Woods was not as pleased after battling to a one-over 71 on the Firestone Country Club course where he has won eight times.

“I didn’t hit the ball well, didn’t putt well, didn’t do anything well,” he said. “The only thing I did well was I fought hard.”

Woods did manage to crack a joke about his putting. “I had bad speed, bad line. Other than that it was alright,” he said, smiling broadly. (Reporting by Andrew Both in Cary, North Carolina, Editing by Gene Cherry and Larry Fine)