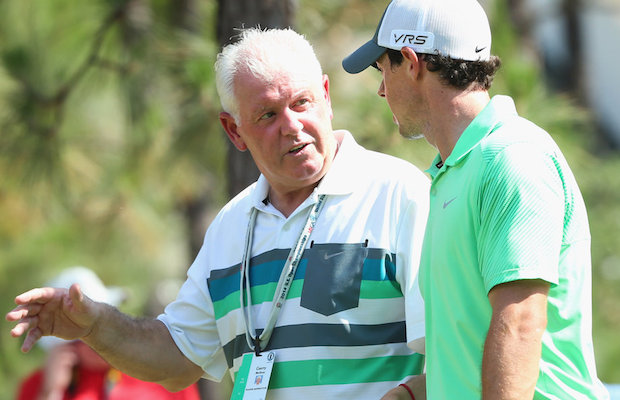 Rory McIlroy is winning big these days, and not just for himself.

The Northern Irishman opened the final round of the 2014 Open Championship with a six-shot lead, and while his margin was shaved to two on multiple occasions, he breezed home to a two-stroke victory and his third major championship.

He has now won the U.S. Open, PGA Championship and Open Championship, all by the age of 25. And apparently not a moment sooner.

As the golfing media has notified the public all weekend, McIlroy’s father, Gerry, and three of his friends bet on Rory winning the Open Championship.

But it wasn’t at the 14/1 odds bookies marked McIlroy at in the beginning of the week. They didn’t even wager on this particular Open Championship.

Instead, Gerry and the gang placed a bet on Rory back in 2004, when the 15-year-old Holywood lad was beginning to rip it up on the amateur scene. A father believed in his son’s talent and, as originally reported, he and his friends placed a 400-pound wager at 500/1 odds that Rory would win the Open Championship by the age of 25.

Well, McIlroy turned 25 this year in May and there has been some confusion as to whether that still makes him eligible, but it was later confirmed that the bet was still solid until he turned 26. That meant the 2014 Open was Rory’s last chance to do good for his father and friends, and he absolutely delivered.

Rory raised the Claret Jug Sunday and, at the reported conditions, his dad and friends raked in 200,000 pounds (roughly $340,000) from their decade-old gamble. And in case any of you are looking to poke holes in a feel good story, Rory admitted to knowing about the wager and clarified that his father had not once brought it up to him in the 10 years since the gamble was posted.

But there is one caveat: The reported figures involved were not entirely correct.