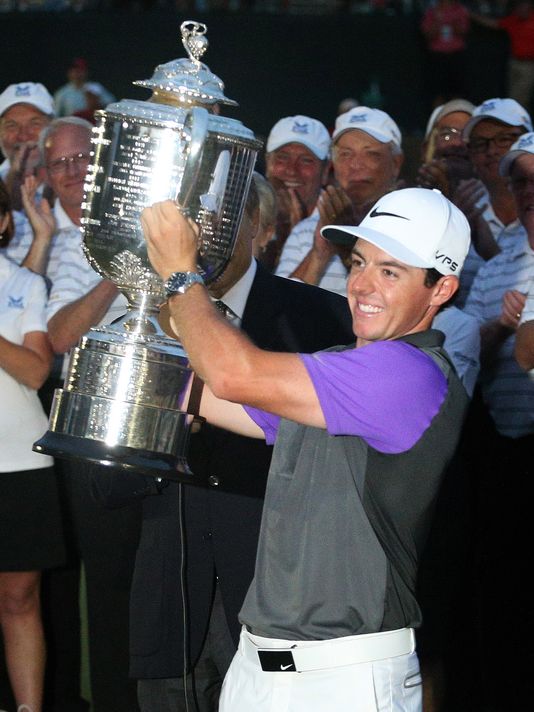 In one of the top 10 sporting events I’ve witnessed, Rory McIlroy wins his 4th major championship in fine Tiger-esq fashion.

LOUISVILLE — Rory McIlroy awoke Sunday to a storm that forced him into a waiting game and then discovered a film crew inadvertently showed the golf world the pass code to his iPhone as he typed it in.

Ninety minutes later he faced the burden of keeping some of the biggest stars in golf at a distance and slugging it out with soggy Valhalla Golf Club to win the 96th edition of PGA Championship.

“Just incredible. I didn’t think in my wildest dreams I’d have a summer like this,” said McIlroy. “. . . . I showed a lot of guts today to get the job done.”

Rory McIlroy wins PGA Championship in near darkness
Two hours into his final round, he had lost the lead he earned through the tournament’s first 54 holes and looked puzzled as his game looked frazzled.

But patient he remained.

The world’s No. 1 player finally gathered himself and remained collected the rest of the way as fireworks exploded on the prairies and backwoods of the Bluegrass State.

Barely beating the setting sun and approaching thunder and lightning, McIlroy held off Rickie Fowler, Phil Mickelson and Henrik Stenson to win the last major of the season.

Ignited by an eagle from 7 feet on the par-5 10th hole, and basically slamming the door shut on his competitors with a birdie from 10 feet on the 17th, the former Boy Wonder won his fourth major of his young career, three of them in his last nine starts and two in his last two.

With a final-round, 3-under-par 68, McIlroy finished at 16 under and defeated Mickelson by one shot. Mickelson closed with a 66 and nearly chipped in for eagle on the final hole in near darkness that would have forced a playoff.

Fowler, who joined Jack Nicklaus and Tiger Woods as the only players in the modern era to finish in the top-5 in all four majors in a season, finished with a 68 and in a tie with Stenson (66) in third.

“This is the first one that hurts,” said Fowler. “This one hurts the most but my performance (this year) in the majors is something I can look back on and be proud of.”

McIlroy two-putted from 35 feet on the final hole.