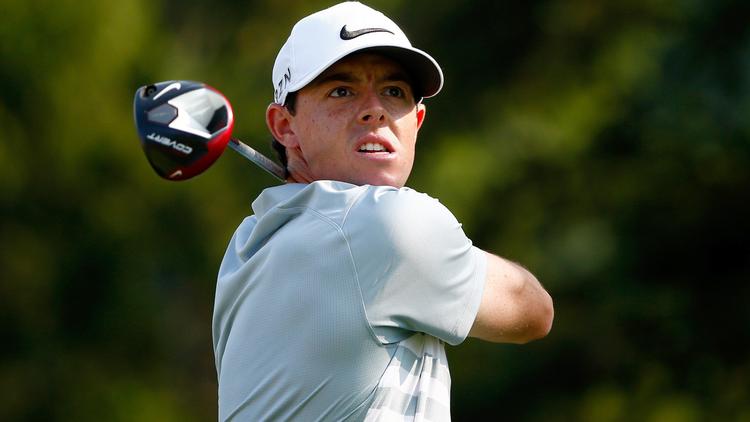 (LA Times) In his first start since a wire-to-wire victory at the British Open, Rory McIlroy wiped out a three-shot deficit in only three holes and closed with a four-under-par 66 on Sunday to win the Bridgestone Invitational at Akron, Ohio, and return to No. 1 in the world.

Sergio Garcia had a three-shot lead going into the final round but McIlroy had three consecutive birdies and already had the lead when he stood on the fourth tee. He took over the lead for good with an eight-foot birdie putt on the 11th hole, got some breathing room when Garcia made bogey on the 15th hole, and cruised home to a two-shot victory.

McIlroy became the 13th player with a major and a World Golf Championship, and joined Tiger Woods as the only players to win them in consecutive starts.

Woods wasn’t around to see it.

Only four months after back surgery, and in his third tournament since his return, Woods injured his lower back when he landed with a thud in the stand from an awkward stance atop a bunker on the second hole. He withdrew after a tee shot on the ninth hole, bending over slowly and struggling to remove the tee from the ground.

He lost the No. 1 position in March 2013 when his game was in a downward spiral as he was adjusting to a new equipment deal and going through another management change. But since winning the BMW PGA Championship at Wentworth in May, his game looks as strong as ever.

“It feels like a long time since I lost that No. 1 spot, but it feels good to be back on top,” McIlroy said. “Hopefully, I can keep it for a while.”

Marc Leishman (67) finished alone in third. Patrick Reed holed out for eagle on No. 17 in his round of 65 and gave him a tie for fourth, enough to move him up to No. 7 in the Ryder Cup standings and boost his hopes of making his first team with only the PGA Championship left in the qualifying period.

Geoff Ogilvy won the Barracuda Championship at Reno for his eighth PGA Tour title and first since 2010, scoring five points with an eagle on the par-five 13th and pulling away for a five-point victory in the modified Stableford event.

Ogilvy, the 2006 U.S. Open winner, had birdies on the par-four 14th and par-five 18th to finish with 49 points. The Australian had 14 points in the final round with the eagle, five birdies and a bogey.

Justin Hicks was second with 44 points after an 18-point round. John Huh and Jonathan Byrd tied for third with 37 points.

Kenny Perry scrambled for a birdie on the 18th hole to beat hard-charging Bernhard Langer by a stroke in the Champions Tour’s 3M Championship at Blaine, Minn.

Perry closed with a seven-under 65 for his second victory of the year and seventh overall on the tour. He finished at 23-under 193.

Langer, the Senior British Open winner the previous week by a tour-record 13 shots, shot 63. He overcame a four-shot deficit on the back nine and was tied with Perry going to the par-five 18th.

In the second-to-last group, Langer’s second shot just cleared the water hazard and landed in the tall grass. He chipped on from an awkward stance and two-putted for par.

One group behind, Perry hit his second shot into the grandstand behind the green. After a drop, he pitched to about 15 feet and made the putt.

Jeff Maggert, Gene Sauers and Marco Dawson tied for third at 20 under. Maggert and Sauers shot 65, and Dawson had a 67.