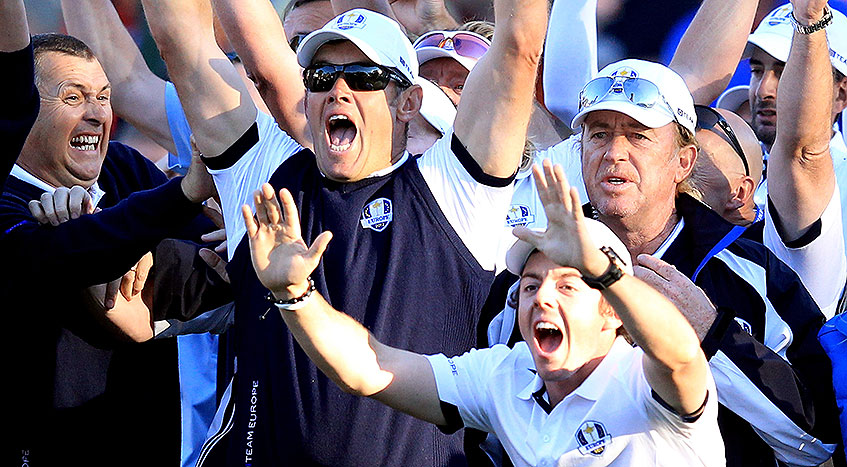 Here is one man’s opinion of the ten best moments in Ryder Cup history over the last 50 years (listed in chronological order):1. 1967: After listening patiently while Great Britain & Ireland captain Dai Rees glowingly introduced his team, U.S. captain Ben Hogan simply asked his team to stand, mentioned their names and then added: “Ladies and gentlemen, the United States Ryder Cup team … the finest golfers in the world.” The home crowd at Champions Golf Club in Houston erupted. Game over. The U.S. team won all six sessions (a different format was used then) in rolling to a dominating 23½-8½ victory.

2. 1969: It was the closest Ryder Cup yet. The teams were tied with the last match on the final hole. Tony Jacklin, who’d won that year’s Open Championship to become the first Brit in 18 years to hoist the Claret Jug, faced Jack Nicklaus. Nicklaus, who was playing his first Ryder Cup, holed a clutch 4-foot par putt to force Jacklin to match him with his own short par putt. However, rather than give Jacklin a chance to miss, the always gracious Nicklaus conceded the putt. The Concession, as it came to be known, resulted in the first tie in Ryder Cup history, and endures as a symbol for exemplary sportsmanship generations later.

3. 1979: The U.S. team dominated the first 50 years of the Ryder Cup (18 wins, 3 losses and 1 tie). Nicklaus was among those who’d recommended the Great Britain & Ireland team should be expanded to include all of Europe in order to make the matches more competitive. All of Europe was represented for the first time in 1979. The U.S. team easily won at The Greenbrier that year (18½-9½), but the appearance of Seve Ballesteros from Spain ushered in a new era for the Ryder Cup.

4. 1983: An improving European team, which would eventually put four teammates from four different countries into the World Golf Hall of Fame, was threatening to beat the U.S. team for the first time in America. To hold off the Euros, Lanny Wadkins was going to need to come from behind to get at least a half-point in his match with Spain’s Jose Maria Canizares. Wadkins was still 1 down while playing PGA National’s final hole. He hit his 70-yard approach shot on the par-5 into a darkening sky. With lightning crackling in the distance, Wadkins’ ball almost dropped into the hole to halve the match. Almost simultaneously, Tom Watson closed out Bernhard Gallacher on the 17th hole. U.S. team captain Jack Nicklaus kissed the divot made by Wadkins and celebrated the narrowest of victories, 14½ – 13½.