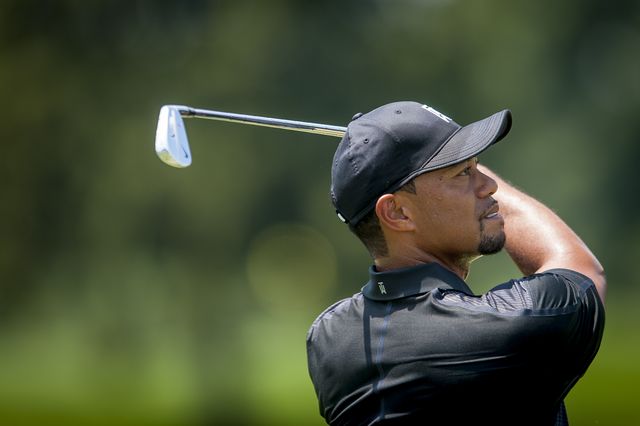 (Washington Times) There was no overwhelming wave of applause as Tiger Woods stepped onto the driving range at Congressional Country Club shortly before noon on Tuesday. The crushing mob that would have greeted Woods even two years ago was reduced to a subdued cluster of fans, few of whom bothered to vocalize their encouragement or pursue an autograph.

For now, Woods can revel in the calm of his much-awaited return. Come Thursday, when the first round of the Quicken Loans National begins, there will be no mistake: The world’s most popular golfer is back.

Two days before his first competitive round of golf in over three months, Woods spent roughly 45 minutes working through a selection of clubs on the driving range, eschewing a practice round in order to make it to the White House for an evening reception honoring last year’s Presidents Cup teams.

The session marked the first time Woods had practiced in public since undergoing a procedure to relieve the pressure of a pinched nerve in his back on March 31. When he tees off Thursday — he’s scheduled to join Jordan Spieth and Jason Day on the 10th tee at 8:12 a.m. — the next stage of his recovery can begin.

“Once I got back to where I was playing golf and knocking off rust and playing, shaping shots, looking at holes, strategizing how to play them, things started coming back quickly,” Woods said Tuesday morning. “Lo and behold, here we are.”
Read more: http://www.washingtontimes.com/news/2014/jun/24/tiger-woods-expects-rust-quicken-loans-national-he/?page=1#ixzz35hz7EAl1