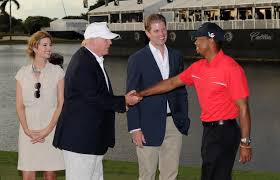 With the first of his golf course designs set to open next week in Mexico, Tiger Woods on Tuesday announced another project along with Donald Trump that is scheduled for a 2017 opening in Dubai.

Tiger Woods will design a Dubai golf course set to open in 2017 that will be managed by Donald Trump.

The 18-hole course will be at Trump World Golf Club, Dubai within a 55-million square foot community called Akoya Oxygen. Trump, who is involved in several golf courses and resorts, will manage the property.

Woods had another design project called Tiger Woods Dubai, with the course designed and a few holes seeded before it was halted due to the economy in 2010. Another project in South Carolina also stalled due to developer finances.

His first course to open, El Cardonal at Diamante, is located in Cabo San Lucas, Mexico. Woods is also designing a course outside of Houston called Bluejack National which is scheduled to open in late 2015.

Woods, who returned to competition last week after a four-month absence to deal with back issues, has maintained that he will “only work on two or three” design projects at a time as he continues to play tour golf.