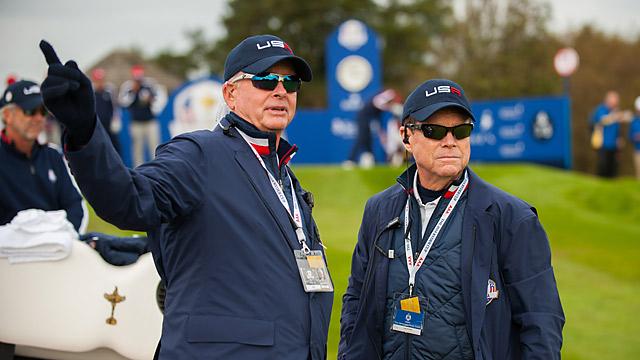 PGA of America president Ted Bishop has a lot of strengths, but holding his tongue does not seem to be one of them.

Bishop took to social media Thursday evening to attack Ian Poulter for his criticisms of former Ryder Cup captain Nick Faldo, calling Poulter a ‘lil girl’. The posts have since been deleted.

Bishop said via Twitter: “@IanJamesPoulter -Faldo’s record stands by itself. Six majors and all-time RC points. Yours vs. His? Lil Girl. @NickFaldo006 @pgaofamerica .

In his new auotbiography No Limits: My Autobiography, Poulter criticized Faldo’s on-air comments during the Ryder Cup, in which Faldo said Sergio Garcia was “useless” during the 2008 Ryder Cup.

“Sergio puts a brave face on it but the rest of the guys are fuming. I’m shocked that he has said it. It’s highly disrespectful. It’s a cheap shot and it’s the worst possible timing.

“And he was captain. So who’s useless? Faldo might need to have a little look in the mirror. I have always got on great with Faldo in the past and I have a great deal of respect for everything he has achieved but this feels like sour grapes. It feels like a guy who is still bitter that he lost in 2008.

“Faldo has lost a lot of respect from players because of what he said. There were plenty of things a lot of the players were unhappy with at Valhalla but none of us criticised him. He may find that begins to change now.”