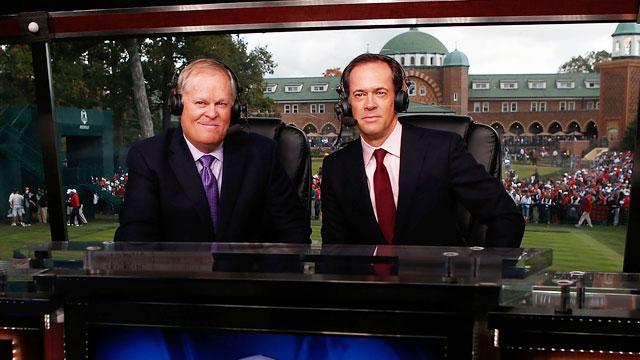 NAPA, Calif. — In his own words, Johnny Miller doesn’t think he has lost his marbles. Not all of them, anyway.

And there’s a big part of him that wants to see if Tiger Woods can find his game.

Miller was the first person who dared to mention the “C” word (choke) in a golf telecast. As he finished his 25th year as the lead analyst for NBC Sports, he began thinking about the “R” word – retirement.

It didn’t help that NBC lost the U.S. Open when the USGA couldn’t refuse an offer from Fox that topped $1 billion. Miller also has a history of leaving on his own terms. He started scaling back his playing career in his early 40s.

“I was thinking I’m 67. I’m getting up there,” Miller said over the weekend at Silverado, where he was the unofficial host at the Frys.com Open. “I didn’t know how my marbles were going to be at that time. So far, I haven’t lost too many. I’ll be the first guy to quit this if I start losing it.”

Instead, he extended his deal with NBC Sports through at least 2017, with an option for another year.

That would end a year before the U.S. Open returns to Pebble Beach for the sixth time, and part of Miller wonders if there’s a chance he can play some role on TV. It’s bad enough not to be calling the shots at a U.S. Open, even worse when it’s in Northern California, the roots of his Hall of Fame career.

“That would be tough to watch Pebble or Olympic Club and not be able to cover it,” Miller said, pausing to smile before adding, “For me. Maybe not for other people.”

Miller has annoyed plenty of people – mostly players – during his 25 years in the booth.

It’s nothing personal. It rarely is with Miller.