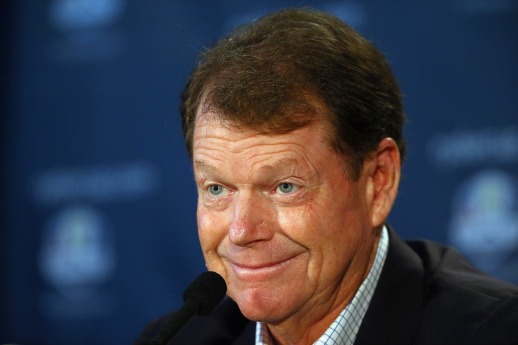 For a variety of reasons, ranging from a bad back to a crooked driver, Tiger Woods didn’t automatically qualify for Tom Watson’s 2014 U.S. Ryder Cup team. He finished 70th in the standings after the PGA Championship, and before Tiger’s most recent announcement that he was withdrawing himself from consideration, Watson was continually answering questions about whether he’ll choose the 14-time major champ with one of his three captain’s picks.
So, would Watson have taken Tiger? It’s tough to tell, because it was clearly a decision he grappled with. At times he seemed bullish on Tiger’s chances, and on others it looked like Tiger had no chance at all. Just look at the variety of statements Watson had made on Tiger over the year:

About a week after Tiger finished T-25 at the WGC-Cadillac, and two weeks after his WD at the Honda, Watson was asked about Woods, who was looking visibly hurt when he played in tournaments. Woods was already sitting outside the Ryder Cup standings. Nevertheless, Watson wanted Tiger on the team.

“I want Tiger to be on the team in the worst way, I just hope he’s healthy enough to be able to play. It’s really early yet, way too early to tell.”